When it comes to developing a mobile application, developers get into the dilemma of selecting the right platform. And sometimes, it leads to a debate of Ionic vs. Flutter.

Some engineers say Ionic is perfect, and some say Flutter is the best choice. Everyone is right at their place, as everyone is working on different projects.

Now, it’s our time to discover which one will be the accurate pick for our mobile application development from the Flutter vs. Ionic debate.

A dive into the contrast: Flutter vs. Ionic

Ionic is a front-end development framework, available freely over the online repository with an open-source license, leveraging developers to customize it as per requirements.

The very first release of this framework was in 2013, making it easy for development experts to create cross-platform compatible applications.

It works smoothly with HTML, CSS, Javascript, and JS-based frameworks, such as Angular, Vue, and React Native.

Let’s have a look at some its statistics.

As per the Developer Survey, 86% of the web developers prefer Ionic as their primary tool for furnishing platform-independent applications.

With evolving market trends and rapidly increasing competition, the organization wants to retain its customers and optimize its conversion rate.

And having a responsive application can help you to achieve this goal quickly.

With Ionic, you can enhance the front-end user experience and build progressive web applications. And, due to its capability of building intuitive UIs, more enterprises are opting for it.

In 2017, Google released the first version of Flutter, an SDK for fabricating mobile applications using the Dart language.

Flutter is highly appreciated by industry experts for developing native applications, as it helps to enhance the app’s performance and extend its functionalities.

Within the two to three years of its release, it was in the top SDK list of software engineers.

Its easy-to-plug with backend, scalable code, and seamless functioning with Objective C and Swift language are the reasons behind its immense popularity. In addition, ample community research supports it by testing and updating this tool to align with current and upcoming technologies.

Moreover, with its hot reloading mechanism, you can modify your application’s look and responsiveness as you code, making you a step ahead of using Ionic.

Further, if we compare the past three years of cross-platform compatible frameworks usage, Flutter is taking the lead with 42%, the highest number of users around the globe.

In addition, Flutter is stocked up with various reusable UI elements, leading to adding input fields, sliders, and buttons on the interface with low code for both Android and iOS.

Where and When to use?

Let’s go through the uses of Ionic one-by-one:

Now, we know for which projects we can use the Ionic framework.

So, let’s have a look at the usage of Flutter SDK.

You can create plenty of applications with Flutter and for having a better insight about its usage, get through each below-listed point.

Checking the smoothness and functionality

We know for developing what type of applications we can use Flutter and ionic.

So, let’s move further to know how smooth, stable, and fast your business applications can be with these technologies.

When there is a need to develop a high-performing application with heavy animations and graphics, most industry experts prefer Flutter.

Its in-built features and hot reloading features lead the developers to create a top-notch business app, assuring increased user engagement and conversion rate. Also, it shortens the time-to-market along with offering a low-cost development.

With an FPS-60, software functions as fast as lightning, and all the components work in sync, reducing the probability of downtime and app crash.

In addition, Flutter uses Dart, a multi-paradigm language. You can easily use it to write a clean code according to your goal, enhancing the native app’s performance.

If you want a lightweight application executing an extensive amount of operations, then you can rely on Ionic’s speed and reliability.

It uses a standard browser and the smallest processing unit, making its size smaller but equally powerful compared to flutter. You can effortlessly create basic applications and provide a seamless experience to your users.

By selecting Ionic for your software project, you can take advantage of its cross-platform compatibility, command-line interface, and advanced web standards, assuring your app is stable across desktop, Android, and iOS devices.

Both Flutter and Ionic have their features, modules, and components, affecting the stability and speed of your application.

Also, the coding paradigm can influence performance. So, you must check your business requirements before selecting any one of them. However, for the native app, you can surely go for Flutter, and for hybrid, you must choose ionic.

Over time, Ionic has gone through many updates, and its architecture has undergone various modifications.

The current high-level architecture of this framework is present in the form of layers, directly communicating with each other for efficiently processing and completing the end-user operations.

There are mainly three primary layers of this architecture: the: developer framework layer, javascript to Native bridge layer, and host application layer or web view layer. All these work in collaboration for maintaining the data flow and communication.

As all the components of Ionic are Stencil-based, it offers in-build modules for writing the Angular, Vue, and React codebases.

You can easily import any elements of these three front-end frameworks to curate your business solution.

Layer two of its architecture functions to transmit the JSON messages to the host application by converting the Native APIs.

In addition, the JS to Native bridge or the second layer is the only link between the host app and the internal operating system, through which calls trigger the appropriate function.

The first is Dart Framework, and the second is its C++ engine.

Dart framework is responsible for implementing and maintaining all the animations, gestures, widgets, rendering, and foundational structure of Flutter-based applications. And the second layer binds the Dart framework with other channels and runtime.

The C++ engines include Skia, Dart, and Text for enabling the solution to call and trigger native OS APIs through its JS-based binary protocol.

In addition, the hot reload method in the first layer plays a vital role by displaying all the changes made in the source code within 3 seconds.

As a result, these two significant layers of Flutter architecture work together, optimizing the app’s scalability, robustness, and performance.

It can be unclear while selecting a winner from the Ionic vs. Flutter, as you can consider both for creating mobile applications.

Suppose you are comfortable in furnishing a heavy application. In that case, Flutter must be your first choice, and if you need a hybrid and lightweight application, then Ionic can be your reliable technical support.

In addition, you must consider that Ionic is compatible with Angular, Vue, and React, whereas you can only use Dart with Flutter.

Otherwise, it depends upon your business requirements and goals. 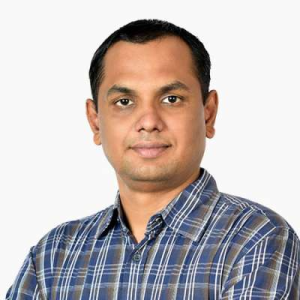 Jemin Desai is a Technical Product Manager and tech-savvy at Positiwise Software Pvt Ltd. He has more than 20 years of experience for implementing the latest technologies in designing top-notch products for multiple clients. He can do all with perfection, from market research to feasibility analysis and aligning the project with accurate methodology. By turning his writing hobby into a passion, he’s been providing scholarly articles to various audiences.